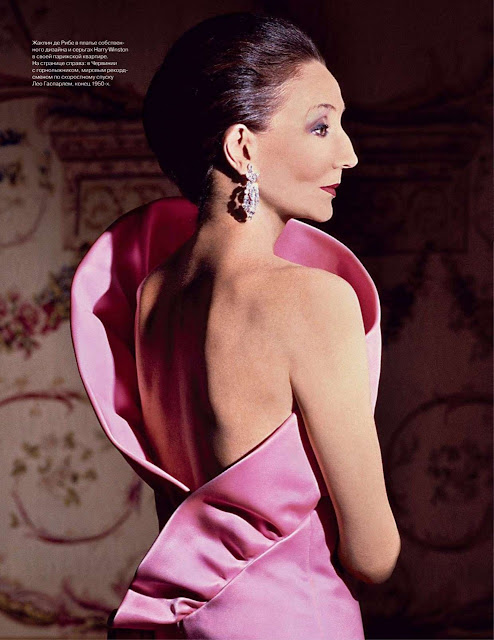 “I was born on July 14  - I evidently stirred up a little revolution.”
Born Jacqueline Bonnin de La Bonninière de Beaumont on Bastille day in Paris, 1929, Jacqueline de Ribes made a namesake of herself as an icon of glamour and society. Her father, Jean de Beaumont, comte Bonnin de la Bonninière de Beaumont, was a French aristocrat and her mother was a Hemingway translater. Jacqueline's upbringing, although showered in French wealth and glamour, was shadowed by the hardships of war and the emotional detachment from her parents.
While her father was a charmer, neither parents had much warmth for Jacqueline or interest in her ballerina aspirations, so she found sanctum with her grandfather. “My grandfather lived a bit like a nouveau riche, he had a châteaux, yachts, racing stables, women, cars”—including a special 1932 all-terrain Citroën equipped with tank-type tracker-rollers to climb up the slopes he liked to bobsled down. During the Spanish Civil War, loyalist refugees used to cross the border, at the Bidasoa River, into France, and land in the gardens of her grandfather’s summer compound in Hendaye, on the Côte Basque. "So, from a young age, I was very conscious of war. But I was a dreamer, and basically optimistic.”

When her adored grandfather's health began ailing with cancer, an overwhelmed 10 year old Jacqueline turned to theatrics to try and divert his outlook. Desperate to revive his health, one time she halted all workmen at her grandfather's house to stage a play for which she wrote, costumed and performed with her sister. “He was the only one who loved me,” Jacqueline said. “I begged to be his nurse—and I dressed the part, too. But nothing helped against death. When my grandfather died, I was completely lost. Then the war started—and I was almost glad because I thought, Now other people will be sad like me.” 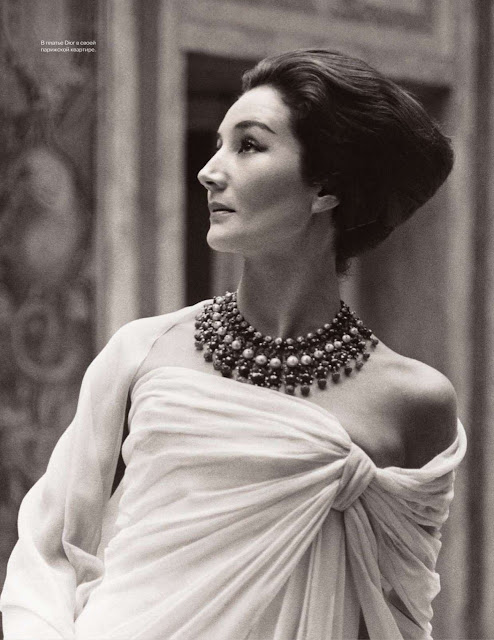 During the Occupation, Jacqueline was sent away to Hendaye with her siblings and their Scottish nanny (who shortly thereafter was seized as a British national and locked up in a forced-labor camp). Her replacement was a loathesome French governess, whom they tried to poison every night. Jacqueline was 13 when he parents moved her further inland in fear of American forces landing on the beach near Hendaye. She was sent to the château of the Count and Countess Solages, in the center of France. “In the château, it was half us and half German officers. Twice a week, prostitutes were brought in for them on a truck—we saw all this. Finally, the American Army came and liberated us.”

When she was 18, Jacqueline attended a luncheon party at the house of an acquaintance in Saint-Jean-de-Luz, not far from Hendaye on the Côte Basque where she met her future husband, the Vicomte Édouard de Ribes. She was sitting outdoors beneath a tree when a dark-haired fellow, carrying a tennis racket and dressed peculiarly in shorts, red socks, and purple espadrilles, dropped into the empty place beside her. “In 1947,” Jacqueline explains, “you still needed tickets to buy extra clothes.” The young man, Vicomte Édouard de Ribes, a 24-year-old war hero, had used his rations “to buy the ugliest things possible in the Basque country. But he made me laugh.” Édouard remembers, “I saw this gazelle and immediately fell in love.” Édouard asked “the gazelle” when she was departing for Paris—she was due to return to the city for her baccalaureate exams. “And the next thing I knew, there he was on the same train.” They married in Feburary 1948. 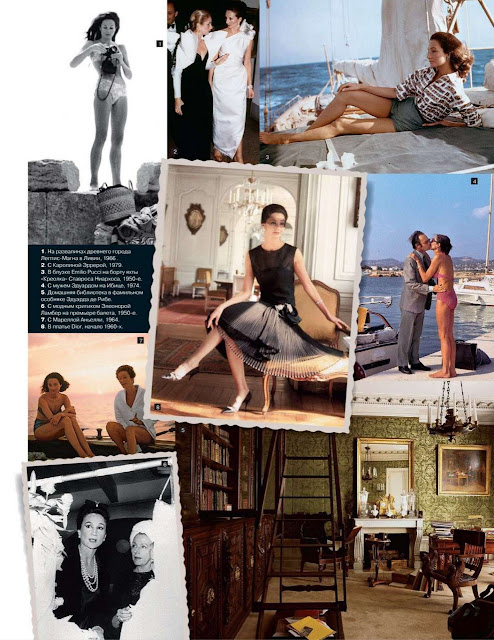 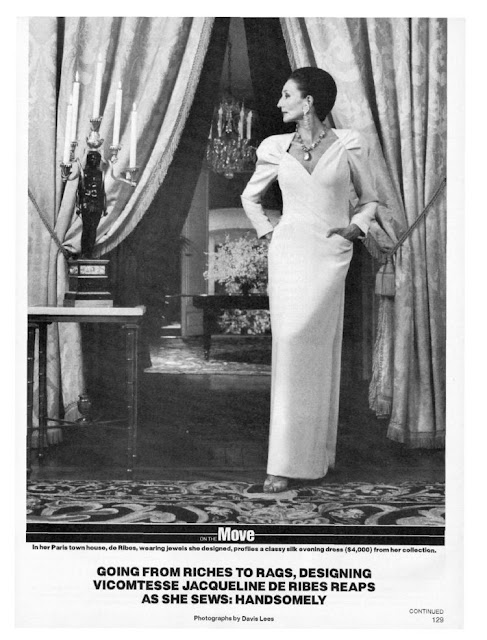 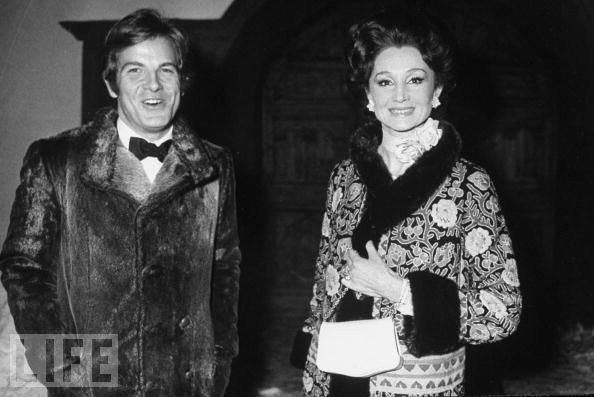 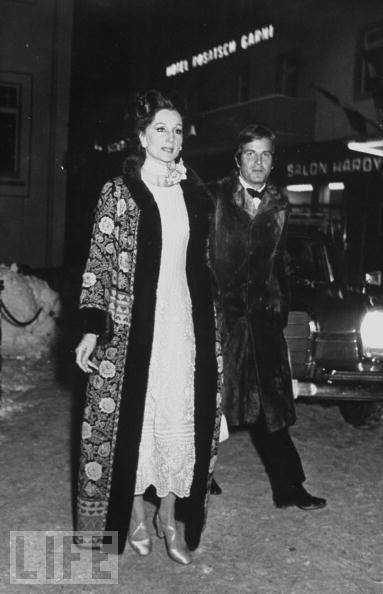 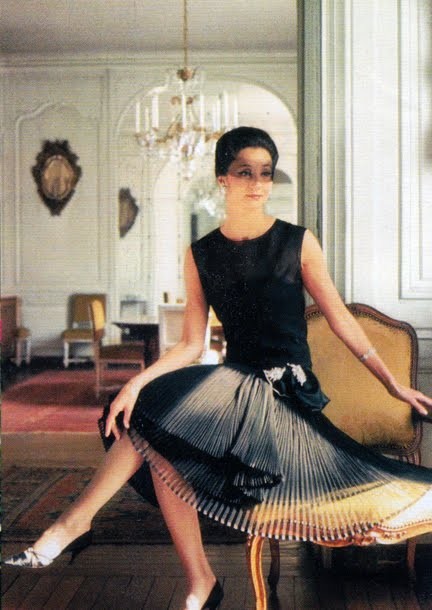 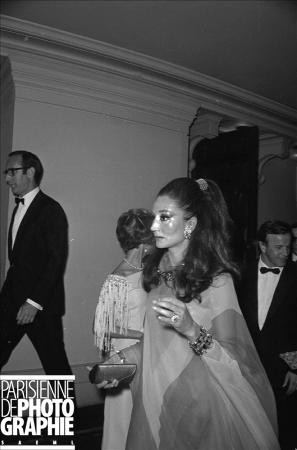 With their aristocratic ties, The Vicomte and Vicomtesse de Ribes and all their Friends became somewhat royalty in the era of glamourous French society. "It was the peak era of sports cars, of haute couture, of society at its most international, of Paris as the capital of the world.” Observes Prince Nicolas Dadeshkeliani, “Jacqueline was the queen of it all, the de Gaulle of fashion. For French culture, the last real fireworks were in haute couture. And Jacqueline was in on that boom.” 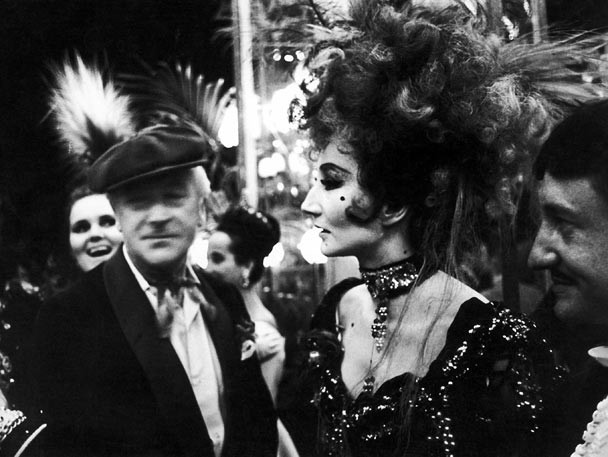 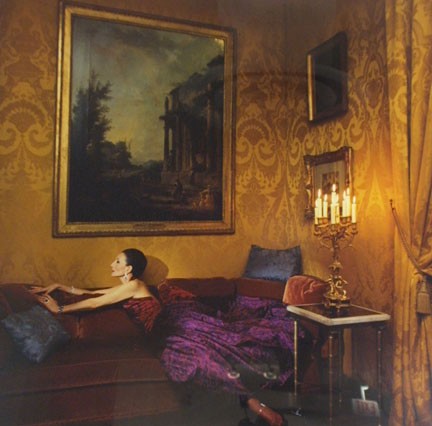 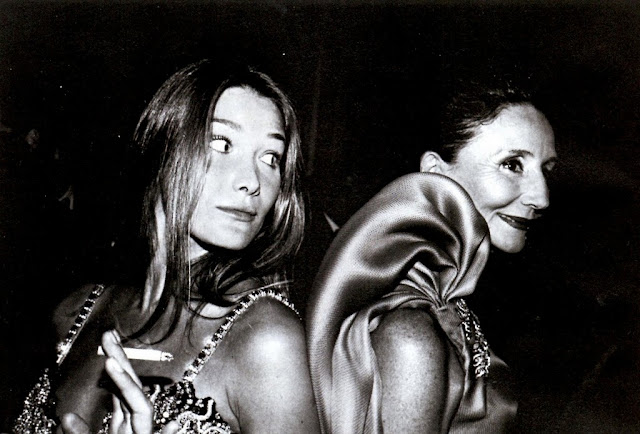 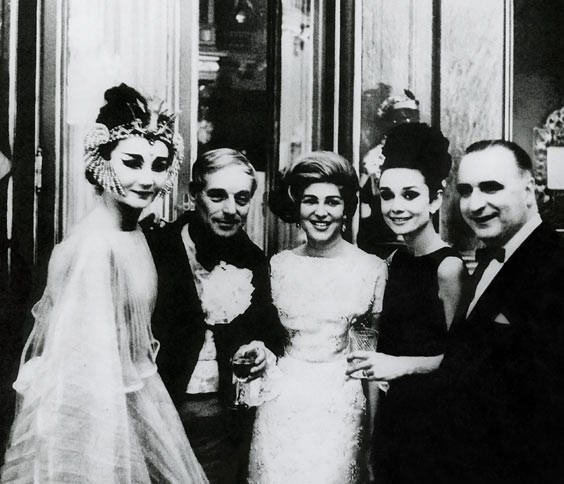 Shortly after her 53rd birthday, on July 18, 1982, Jacqueline called a family meeting that had been a long time in coming. She informed her husband and her children that she was going into business as a fashion designer, and there was nothing anyone could say or do to stop her. Jacqueline also confided her plans to Pierre Bergé and Yves Saint Laurent. “She was a good client and friend since the beginning,” Bergé says. “She was born into that atmosphere and had the talent to create.” Yves, however, feared that she would end up suffering terribly, as he had. “We thought she was out of her mind,” Hélène de Ludinghausen admits. “But it was her dream and she did it.”

She debuted her first collection at Paris Fashion Week in 1983 in her home. Her line was luxurious, though ready-to-wear, and was well received, especially in the USA - Saks signed for an exclusive 3 year contract. In 1984 she added jewelry to her line. 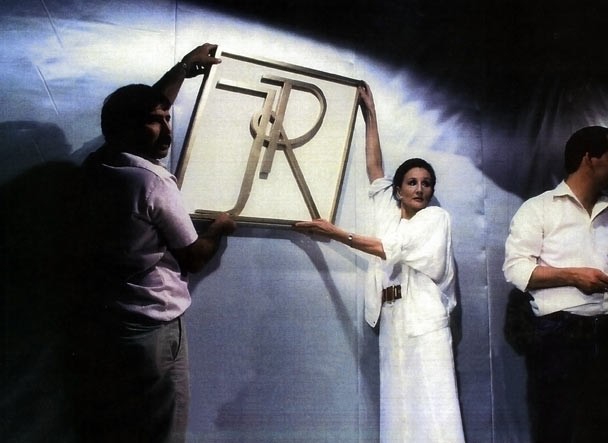 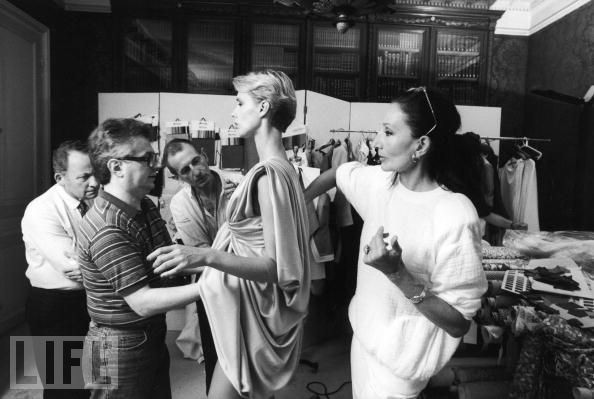 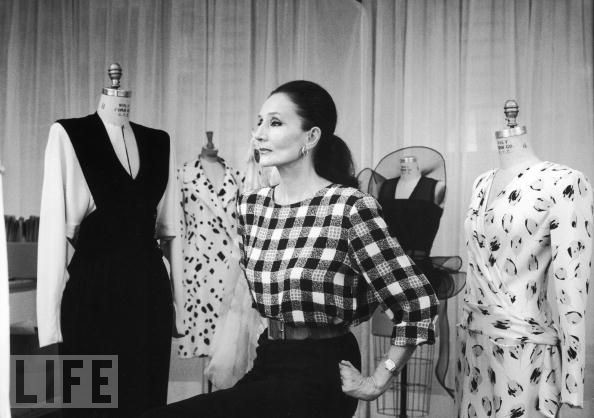 Jacqueline continued designing collections through the nineties. Although she has since abandoned her fashion career in design, she remains an icon of style and glamour. I hear she once considered writing her memoirs - apparently her life is too fabulous to even know where to start. I would agree. 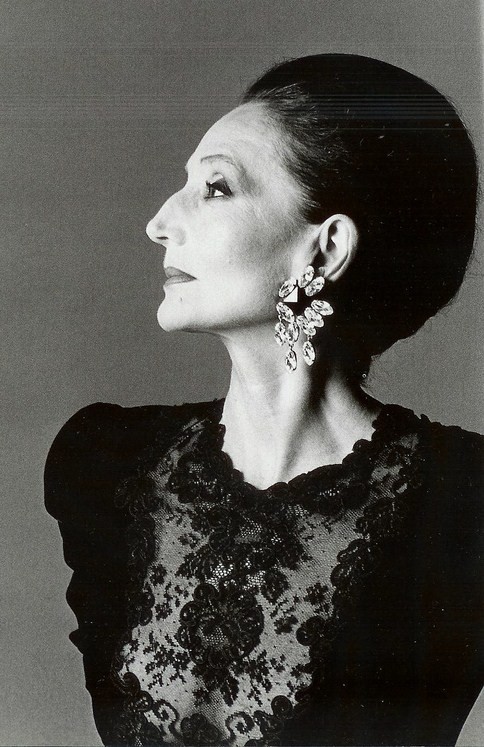 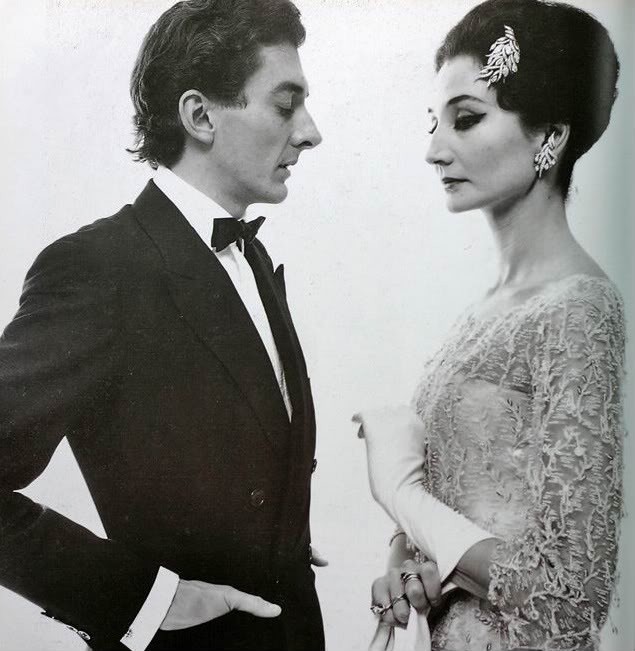 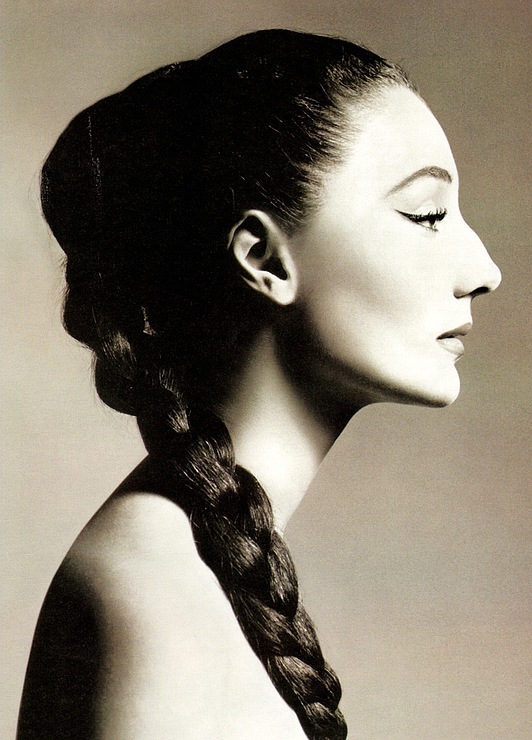 Posted by Red Revolution at 3:11 PM

Trying to find a particular DOB?